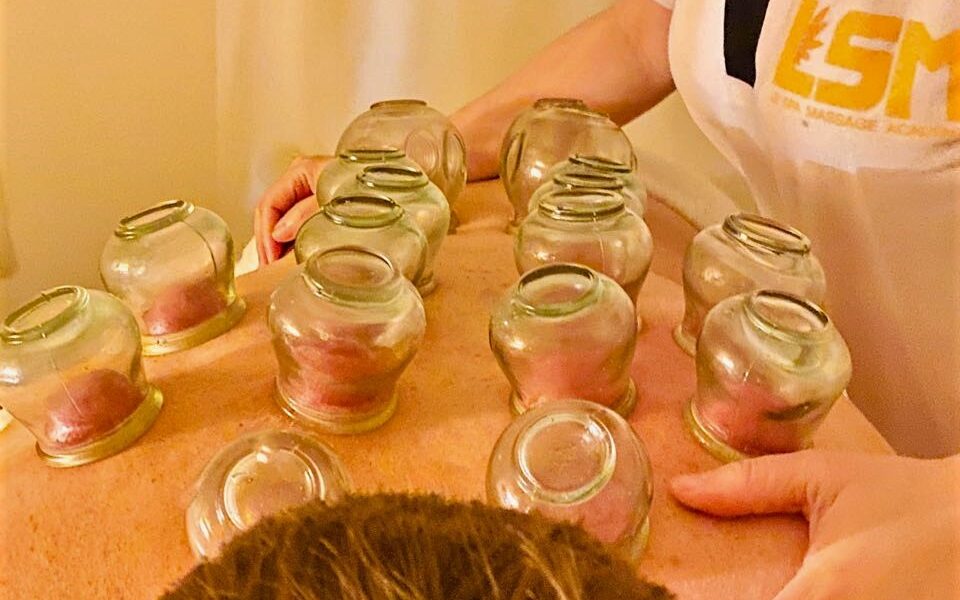 WHAT IS TRADITIONAL FLAME CUPPING?
Cupping therapy is an ancient form of alternative medicine and has been around for thousands of years. Cupping is based on the belief that certain health problems can be caused by stagnant blood and poor energy flow through your body. To reduce or prevent those health issues, cupping practitioners apply cups—typically glass or silicone—to your skin to create a pressure that sucks your skin inward. The pressure that the cups create draws blood to the affected area, increasing your blood flow overall

WHAT IS BENEFITS OF CHINESE CUPPING?

WHAT TO AVOID AFTER CUPPING THERAPY?

Cupping therapy is based on the meridian theory of the body.

Cupping therapy is known to help activate the lymphatic system, promote blood circulation and is good for deep tissue repair.

WHAT CAN CUPPING THERAPY TREAT?

Cupping is generally recommended for the treatment of:

WHAT TO EXPECT AFTER CUPPING IF IT APPEARS SOME MARKS OR BRUISES?

After the cupping therapy, your skin may appear red circular marks. It’s important to understand that is not bruises and it doesn’t hurt. However, there is a opposite common assumption that cupping marks are bruises. Based on various research show that Bruises are triggered by an impact trauma that breaks the capillaries in the injured area. The cupping mark is a different thing. As cupping therapy cause no compression or impact trauma when it done correctly, they lift your skin and tissue in order to increase blood circulation and release toxins in the body. So which means the darker the mark, the more stagnant fluids (toxins, blood and lymph) were dredged up.
In China, they are called yinzi, meaning “marks”, the Greeks use the term of dachylidia indicating “rings”. And the people who grow up with cupping know that cupping is beneficial and stimulating indication that the variety of pathogen has been delivered to the  surface due to the suction of cupping. That is the visible sign of success since it enhance healing process.

But it need to be understood that the Myofascial Cupping – Cupping without causing marks has been not successful. Many research claims that myofascial cupping is a soft tissue therapy for relaxation, restoring vitality. The treatment has been developed in reducing in pain intensity and disability.  Moreover, it reduces the recurrence rate of pain therefore enhancing quality of life.  Nowadays, cupping is an integrative therapy in modern medicine which can combine with healthcare plans for chronic pain.

In conclusion, the marks look painful but in most cases they are purely aesthetic. Some people don’t experience bruising at all. As the reaction is based on the elasticity of individual skin

Click here to get to Le Spa Massage Academy.

Book Now
Call Now Button
×
You must be logged in before using WishList. To login click here